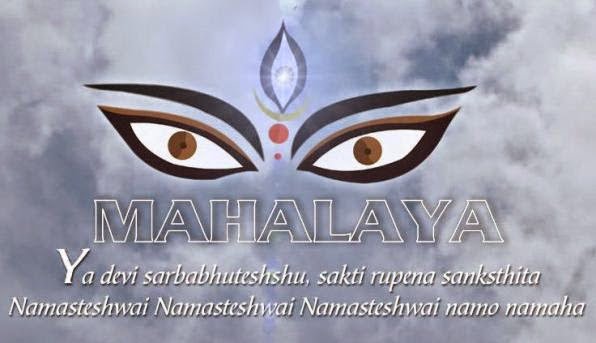 “Mahalaya day”, the day Durga was assigned the task of eliminating evil. An invitation to the mother goddess to descend on earth – “Jago Tumi Jago”.

The traditional six day countdown to Mahasaptami starts from Mahalaya. Goddess Durga visits the earth for only four days but seven days prior to the Pujas, starts the Mahalaya. The enchanting voice of Birendra Krishna Bhadra fill up the predawn hours of the day thus marking the beginning of  “devipaksha”and the beginning of the count-down of Durga. It is an auspicious Indian occasion observed seven days before the Durga Puja, and heralds the advent of Durga, the Goddess of supreme power. The dark fortnight of Aswayuja is known as the  Mahalaya Paksha or the fortnight specially sacred for offering oblations to the departed ancestors. Durga – goddess of deliverance – comes to earth on the seventh day after the autumn new moon. She is depicted by the ‘kumors’ or potters as a resplendent golden figure standing on a lion’s back, each of her ten arms bearing a particular weapon, as she triumphs over the demon Mahisasura.